メインコンテンツにスキップ
Inside Out Semtech’s Corporate Blog 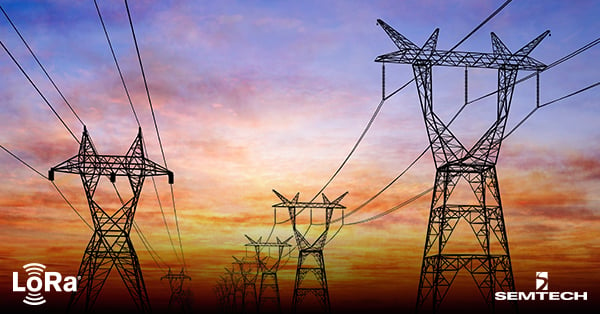 Data is at the heart of intelligent process automation, but where does that data come from? Collecting accurate data remotely has always been a challenge for utilities. This has led to fragmented data collection systems that restrict the use of data analytics at the scale necessary to make a real difference to the business and to consumers.

It is the distributed nature of the data collection requirements that is the key challenge. Installing smart meters in homes requires a reliable, secure backhaul that does not rely on existing infrastructure that may or may not be available.

Using unlicensed frequency bands below 1GHz enable links that can reach kilometers in length, allows remote locations to be connected and also provides links to meters that can be hidden away. These sub-GHz frequencies also address one of the most pressing challenges of smart meters, the location. The meter may be placed in a number of different locations in different houses and making sure the signal gets to and from the meter is key. The penetration of the radio signal for LPWAN networks allows reliable connection to meters that may be in basements, or high up in tower blocks.
The signals are connected by a local gateway, increasingly run by third party network providers, and relayed to the cloud to be ingested into data analytic systems. The long range and high penetration of the radio signals reduces the number of gateways needed and has allowed cost effective LPWAN networks to be rolled out in many countries.

The LoRaWAN® standard, developed in 2015 specifically for low power sensor networks and built on Semtech’s LoRa® modulation technology, is increasingly used in sub-stations for fault detection and smart grid monitoring like how Elvexys SA is doing for OIKEN in Switzerland and in remote areas to monitor equipment, providing data on the performance of system. Using battery-backed wireless sensor nodes can provide vital data that can even predict when equipment is failing, allowing replacements to be made in scheduled maintenance rather than responding to a potentially catastrophic failure. Here, the lower power requirements of LoRaWAN mean that the batteries on a wireless sensor node can last for many years, avoiding the cost of battery replacement cycles that can plague large scale data-capture deployments.

Keeping user data safe and secure is of course a key requirement. The LoRaWAN network includes an embedded two-layer security based on AES 128-bit encryption keys that is optimized for low power data networking. This means that data can be encrypted from the smart meter all the way through to the enterprise data systems. As LoRa packets do not use the IP protocol there is no need for converting the data and it can remain secure in an end-to-end implementation.

One of the challenges for the industry is the support of the most important standards for smart metering data and applications. This is being addressed through active support from open organizations such as the LoRa Alliance® and major associations defining metering standards to enable interoperability of meters and provide certification of compatibility. Utilities can then rely on standards of metering applications over LoRaWAN networks. LoRaWAN is now an internationally agreed standard as Y.4480 from the ITU Telecommunication Standardization Sector (ITU-T) and is used by hundreds of companies in the LoRa Alliance.

For the European market, specifically for metering in water, gas and heat, the LoRa Alliance has an official liaison with the OMS Group association on the standard use of the Open Metering System (OMS) metering language using M-Bus over LoRaWAN to reduce the complexity and cost of integration for utilities. In OMS over LoRaWAN, OMS serves as the application layer on top of the M-Bus adaptation layer over the LoRaWAN network layer. This enables a standard M-Bus transport over LoRaWAN. Semtech collaborated with the OMS and LoRa Alliance to validate the interoperability on all levels, from the data platform down to different OMS end devices connected via the same or different LoRaWAN networks.

The key benefit for utilities with LoRaWAN networks versus the wireless Mbus connectivity is keeping same data format and same OMS application layer while having the benefit of LoRaWAN, providing much low power consumption, and better long range and deep indoor penetration than W-Mbus can. This is particularly suitable for battery powered meters that are often installed deep underground, or in concrete or other hard-to-reach areas. In addition, there is a benefit of possible firmware updates over the air (FUOTA) as specified by the LoRa Alliance for LoRaWAN.
This goal of the new specification by OMS is to ensure interoperability with legacy OMS-based systems and give utilities an open and flexible choice for the network model between public, private or hybrid networks. Utilities can adjust network deployment to their business and decide to be free from the costly burden of deploying and maintaining radio network infrastructure by using available operators providing LoRaWAN network services.

Similarly, for the global market and for multi-metering and more, the LoRa Alliance has worked with the Device Language Message Specification (DLMS) user association on new communication profile to support the DLMS standardized by ISO/IEC (IEC62056 standard). DLMS defines the semantics and the syntax of a language for interoperable data exchange with all kinds of smart devices for utilities.

DLMS has been widely adopted, mostly for the electricity metering with the DLMS/Companion Specification for Energy Metering (COSEM). DLMS is used by over several hundred million electricity meters on a worldwide basis. Rather than using a bridge to convert the data that will result into a non-standard installation, DLMS over LoRaWAN is enabled seamlessly by using IPv6 and UDP internet protocols from end-to-end. The transport of UDP packets is made possible with fragmentation and compression by a standard adaptation layer defined by IETF (in RFC8724 and RFC 9011) using the Static Context Header Compression (SCHC) technology.

Using a single application standard such as DLMS for multiple applications also makes it much easier to integrate data from multiple meters that were previously in separate silos, for example smart electricity meters and smart water meters.

An emerging technology that can further benefit utilities is direct satellite connection. Satellites have been launched with payloads that can handle LPWAN messages directly, relaying the data in near real time from all around the world. Satellite Operators can reuse terrestrial gateway architectures or develop their own Software Defined Radio system (SDR) implementing the target LPWAN modulation. Multiple satellite LPWAN networks are launched or are in the process of launching which provides enterprise users more options for the type of network and analytic engines. This increases volume, increases competition and drives down costs.

The advancements in smart monitoring, data collection and analysis are all part of an ever growing portfolio of cost saving solutions for smart cities and communities.

To find out how companies use LoRaWAN for utility monitoring and other smart city applications, download our smart city e-book.

This article was originally published on information-age.com

Semtech, the Semtech logo and LoRa are registered trademarks or service marks of Semtech Corporation or its affiliates.